"It Raineth Every Day," Wm. Shakespeare

Our wet season has started early and furiously!

June's 30-year average is 5.37" and it is the start of our five-month wet season (and hurricane season). So far we've had 21.25" with 12.5" in the last three days from Tropical Storm Debby. (This is the first time since they started keeping records of named storms that there have been four before July.)

The weather forecasters originally plotted Debby's path to go westward toward Texas, but she did not listen to their predictions and just sat there in the Gulf of Mexico for days and days. Finally, she turned east rumbled her way across northern Florida. Fortunately, she did not bring too much wind (except for a few tornadoes), but so much water has caused flooding, sinkholes, and slumping of whole roadbeds.

We have Met the Solution and It is Us

"We have met the enemy and he is us."

I agree with Pogo and one of the reasons that I continue to write about green gardening and environmental issues is to convince others that each of us can make a significant difference. And when many people change the way they manage their own landscapes and lifestyle choices, the difference is huge. Mother Nature might be able to breathe a sigh of relief.

Email ThisBlogThis!Share to TwitterShare to FacebookShare to Pinterest
Labels: Conservation 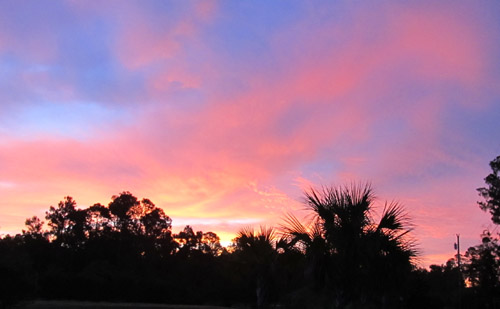 Sunrise this morning as we greet the longest day of the year--6/20/12.
Here's an informative solstice article over on the National Geographic website.

﻿Day length is an important consideration for gardeners, because plants are dependent on day length to regulate their life cycles. Here in northern Florida, we grow onions right through the winter, but we must use short-day or day-neutral onion varieties, otherwise they'd never form a bulb. In Maine, just the opposite is true--they grow onions in the spring and into the summer during the long days.﻿

Sometimes plants flower in the wrong season because they've confused the temperature and day length signals. The Asian azaleas so widely grown here in the south almost always have some boom in the fall here. And now there's even a variety developed that's been bred to bloom twice a year called "Encore." 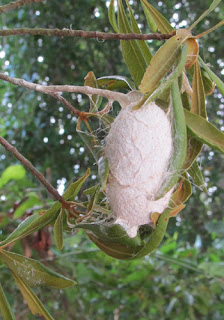 Observations in the Landscape

This morning as my husband and I were trimming back the wax myrtles near the driveway, I noticed this cool white cocoon amongst the trimmings. It's about 1.3 inches long and it's fairly hard. Some of the leaves were incorporated into the cocoon.

I had no idea what this was so I posted it on Facebook and had my answer within a few minutes. It's a Polyphemus Moth (Antheraea polyphemus) a type of silk moth.


And so we now slide backward into shorter days until the next Summer Solstice. Enjoy yours.


Posted by Ginny Stibolt at 1:38 PM No comments:

What if we grew food instead of turf? 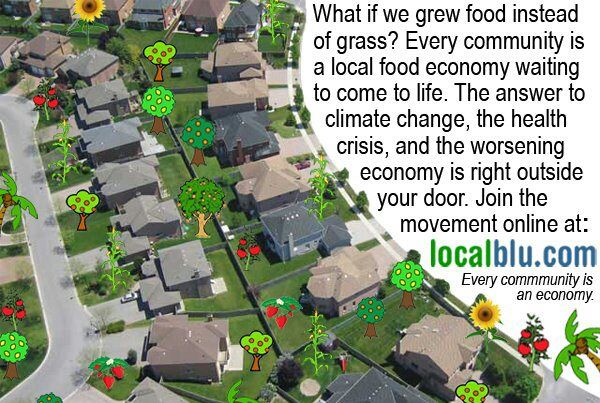 I found this image on ﻿Facebook and shared it on both the Lawn Reform Coalition and Sustainable Gardening pages. While lots of people "liked" it, even more shared it on their own pages. I found even more shares on other pages--it's gone viral. So this simple idea seems to have captured people's attention.
Read more »
Posted by Ginny Stibolt at 10:40 AM 3 comments:

The US Senate unanimously approved the motion to designate the last week in June as pollinator week. Who says the Senate can't agree on anything? In the past five years the pollinator week celebration has become an international event. This year it's June 18--24.

Much of the focus of pollinator week is on our food supply.  Every third bite of food we eat depends upon pollinators. But since 2006, the colony collapse disorder of the European honeybees has alarmed the beekeeping experts. Honeybees have been used as pollinators for hire. Beekeepers move their hives into an area where a large crop (often a monoculture) awaits pollinators in order for fruit to be formed. For example, a female squash flower, needs to be visited eight to ten times by bees or wasps that have also visited the male flowers for a fruit to form.

Read more »
Posted by Ginny Stibolt at 8:26 AM No comments:

In yesterday's Washington Post business section, "Value Added: Mosquito-control business scratches this entrepreneur’s itch" describes a $300,000 business which is a franchise of the mosquito squad and the owner is a full time firefighter. (Update: the article appears not be be available any more.)

This article is wrong on several points in my opinion, but the one concerning green gardening is that the business is one that damages the environment.

General pesticides kill both the good and bad the bugs, which creates an imbalance in the ecosystem--the predators are left without any prey and so they either move away or don't survive. As the bugs recover, Mother Nature's natural predators including birds, bats, and predatory insects such as ladybugs and praying mantids are gone, so the homeowner poisons again and again. Each time the bad bugs come back in greater numbers and some even build up immunity to that poison. It's called the poison cycle.


The author of this article states at the beginning that he is jealous of this parttime businessman, but at the end of the article he hints at the problems he's caused.

The “product” — the franchisees refrain from using the term “pesticide” — paralyzes and kills the insects.

Usually when I get up in the morning, the birds are all over my front and back lawns, feeding on bugs and the millions of other things living in my neighborhood.

But on Friday, the day after Mosquito Squad sprayed, there wasn’t a bug in sight.


For more details on this vicious poison cycle read: "Just say NO to poisons" or "A poison is a poison is a poison." Plus, in "Sustainable Gardening for Florida," I spend a whole chapter on integrated pest management with details on how to manage pest bugs without poisons.

The Audubon Society estimates that some of our songbird populations have shrunk by 80% since the 1960s. That's a lot of birds and there are additional potential reasons for their demise in addition to residential poison applications: loss of habitat and roaming cats. 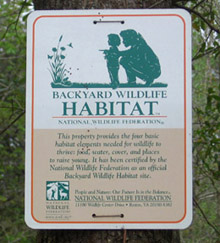 Green gardeners can help the birds by:

Moving Away from Transplanted Gardener

Back in 2004 when my husband and I moved to northeast Florida, the gardening here was weird for me. Even though I have a masters degreee in Botany and have gardened all my life, almost everything I knew about gardening did not apply. So I started a gardener's log of what I learned and shared it on a website (www.TransplantedGardener.com) and various other media.

Adventures of a Transplanted Gardener

Adventures of a Transplanted Gardener click image for link

Please click on image to order "The Art of Maintaining a Florida Native Landscape." 2015.

Please click on image to order "Sustainable Gardening for Florida." 2009.

Adventures or a Transplanted Gardener page