I had some okra, but not enough for good-sized batch of fried okra, so I supplemented it with 5 little sweet onions, some zucchini, and not shown here, about half of a garlic bulb.

I don't have a deep fryer, but this method for tempura works pretty well.

For the last several years, the root-knot nematodes have damaged roots of several of our crops, but we were not aware of it until they were pulled up. Most of the time the crops had been producing well anyway, but why not take all the organic precautions we could to prevent the damage?

I took action last year and planted a dense cover crop of marigolds and dug them into the soil. See my post Nematodes, marigolds & crop rotation for the details. Last fall I planted my cool weather crops hoping for the best, because previously marigold plants scattered around the garden had not had any effect.

Success! Today we pulled the parsley and broccoli, both of which had been seriously affected the last few years. The roots were clean! No lumpy knobs caused by the nematodes.

Changing seasons for our edibles


The tiger zucchinis are doing very well this year and I scramble to harvest them before they get too big. Half of one of these beauties was grated into a tuna salad, while the other half was sliced and was added last to a stir fry featuring onions, garlic, garlic chives, parsley from our garden, plus store-bought celery & 2 Boca Burgers (our favorite non-meat patties). The other one and maybe an additional one still growing in the garden will be the key ingredient in some zucchini bread. Yummy.

The last lettuce crop and the parsley have bolted and the broccoli is done after many months of come-again picking. My husband made a nice tabbouleh from the last of the parsley crop. I've allowed the plants to remain in the garden so their blooms will attract pollinators.
After a few days without rain last week, it was dry enough to harvest the garlic. It's now hanging in the garage to dry. The onions that I harvested last month had dried fully, so we cut off their leaves and roots and stored them in 2 cloth bags in the floor of the pantry. The garlic will also be stored in the same manner in a few weeks. The bulb that had split apart was used right away—it would not have been a good candidate for drying. I'll add some compost to the onion and garlic beds, cover them with pine needles and let them sit for the summer.

A few weeks ago, we noticed a small (30") alligator in our pond. We've lived here for 10 years and had never seen one before. My husband called Fish & Wildlife Conservation Commission to report the gator and for information on what to do. We learned that a gator is not a nuisance until it reaches 4' and that sooner or later every body of water in Florida will host a gator.

A few days later we got a call from these gator trappers saying that a permit had been issued on our gator. They brought their fishing poles with heavy weights and treble hooks. This way they could hook onto the back of the gator and haul it to shore where they could haul it out with a noose-like tool. They deftly used an underhanded casting method to probe the pond. The gator was not found that day. They came back a few days later when they were in the area after trapping a gator from a golf course. Still no gator. We haven't seen it since then, so it probably has moved on—either back to the lake or to another pond in the neighborhood. We wish it well, but our pond frogs and fish are probably relieved.

We love that our neighborhood supports these graceful birds. They are efficient flyers that use only a few beats of their wings when taking off, but then they glide with only twitches of their tails to keep aloft or to change directions. The Audubon Society's website says that they are our most aerial predators. They lift our spirits for sure.


Fire in the sky

Posted by Ginny Stibolt at 10:48 AM No comments:

Down on the farm

A guest post from my grandson Weber who is working on a farm this summer. 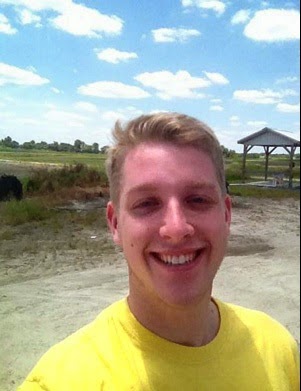 Summer at Magee Farms: Part One

Hi! My name is Weber Stibolt, and I’m one of Ginny’s grandchildren. This summer I am working at a produce farm in southern Delaware, and she asked me to write a few columns for you to show you a little bit about what goes on behind the scenes. I am a rising junior and am studying Food Science at the University of Delaware.

Although there are many paths that I can take with this degree, one of the aspects that interests me the most is food safety. With increased capability to detect foodborne pathogens and an increase in food safety regulations like the Food Safety Modernization Act of 2011, there is and will be an increased demand for specialists to help producers of food ensure that they are taking the necessary steps in order to reduce the risk of microbial contamination.

Magee Farms has been a family farm since 1865 and this is the fifth generation farming the land.

I have been hired as a Food Safety Manager to assist the produce farm in keeping records and making sure everything is in order for the annual food safety audit. I will mainly be overseeing the packinghouse where the watermelons and sweet corn that the farm produces are packed and put onto trucks to be sold at local supermarkets.

The picture below shows just some of the paperwork that goes in to all of this! The government agency completing the audit is the USDA. The paperwork isn't necessarily being turned in - it's being reviewed by them to make sure we are in compliance with everything that needs to be done and is just a means for collecting data like temperatures of water and proper levels of chlorination and a whole list of other things that I will cover in more detail in later posts. 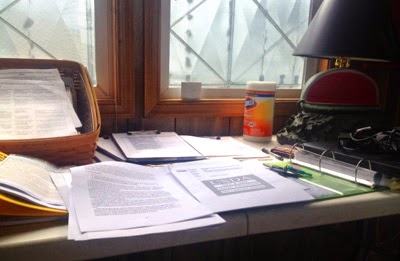 Have you thanked your farmers today?

Please click on image to order "The Art of Maintaining a Florida Native Landscape."

Please click on image to order "Sustaianble Gardening for Florida" on Amazon.com.

To go to the Transplanted Gardener website, click the graphic. The old garden log entries, links to the podcasts, and to the archived articles are still there.