Several people have requested more information about how I compost in place, so this post includes extreme details.

This adventure in gardening began with more lawn removal. In the fall of 2016, I'd created a new bed in front of the rain barrels. It was only about 5' x 4'. Here are the details of "Creating a New Bed."

April 29, 2019
Over this past cool-weather season I'd grown broccoli and curly parsley in the new bed, which had done fairly well. I keep picking the broccoli florets after the initial big curd harvest, so the broccoli season lasts for a long time, but now they were at the end of their cycle. The parsley would last for a while longer.


On April 29th, I moved the lawn edging out further into the lawn to expand the new bed by almost two feet and other bed about 18 inches. So this yielded about 14 more square feet of garden beds. I saved and dried the grass pulled from this area as one of the materials to build a new compost pile. (More on that below.) I used mostly compost for the soil in the added sections. For the closer bed, I planted a pack of marigold seeds and used only a thin layer of pine needles, so the marigolds could sprout, but also so the soil was somewhat protected.

In the next day or so, I began the total bed kitchen scrap composting process starting with the new part of the new bed. I collect kitchen scraps in a metal bucket and when it's been a couple of days or if it's full, then I dump it somewhere in the garden or if I don't have a spot in the beds, on the compost pile. If I'm working on a bed, whether it's a total bed composting project like this or a between row trench composting, after dumping one load, I'll pre-dig the hole for the next batch. This way I can keep track of where I'm to place the next load.

For this project, I dug out oblong holes nearly as wide as the new section of the bed. There were 6 or 7 deposits in that soil. By this time, the broccoli was totally done and I continued into that section of the bed. with some of the old broccoli plants mixed in with the kitchen scraps.


May 20, 2019
I had used much of the previous pile on the extended beds and other projects, so I cleaned out the area, stored the remaining compost in a container and got started with a new pile. All that St Augustine grass that I'd saved from the bed expansion project was well dried by now and I'd accumulated a bunch of other materials. I've written several composting articles with links to them on the Green Resources Page, so read them for more basics.

I laid down some pruning trimmings at the bottom of the pile. This keeps it more aerated, but still allows access for worms and other critters. The base is about 5' x 3'. Then I laid in a layer of the dried grass, some mostly decomposed chips from a path, pond muck, and other brown and green layers until the pile was almost 3' high. I left a swale along the top so water would soak in and not run off, and then I covered it all with pine needles. I added six gallons of rain barrel water to moisten the materials. Rain barrel water is best for this because no chlorine or other purifiers have been added. In compost, we want all those microorganisms.

This is the wet season so there should not be too much problem in keeping it moist, but I monitor it and have had to add some additional water.

July 5, 2019
After the last parsley harvest from the new bed, I inspected the roots. Nice and clear--no root knot nematode damage. Good. It had been a great season with plenty of my husband's great tabbouleh.

I had an extra large load of kitchen scraps, so I buried it all under this whole section of the bed. Not as concentrated as the rest of the bed, but still enough to add the organic matter and the micronutrients.

I wanted to add more depth to the bed, so I raked off the pine needles on top of the bed, but not the sides. I laid down about 20 tall marigold stems across the whole bed that I'd picked from another bed where I'd planted them as a cover crop. This is to keep down the root knot nematodes.

The compost pile had only been in place for a few weeks, but I decided to add about three inches of this unfinished compost across the whole bed. This would give all of that organic matter time to age together in the new bed. This used less than a quarter of the pile, which has already been working and had slumped significantly from its original three-foot height.
After the unfinished compost (where you can still see some of the original materials) was laid in and leveled off, I added the pine needles back on top and added some extra for more thickness.


Meanwhile, a total kitchen scrap treatment for a bed next to the house.


July 22, 2019
Since I had finished the kitchen scrap treatment for the new bed, I moved those efforts over to a bed next to the house where I'd grown zucchini and cucumber. At this point, in the photos below, I was working on the second row up the bed. I dump the scraps in the pre-dug hole, fill the pail with rain barrel water, empty that water into the hole with the new scraps, cover the hole with several inches of soil, cover the soil with pine needles, and then dig out the next hole.


The last treatment for the new bed until fall


August 6, 2019
The bed just past the rain barrels (not the one next to the new bed) served as a pollinator garden this spring. It was filled with tropical sage (Salvia coccinea), Indian blanket (Gaillardia pulchella), coreopsis (Coreopsis lanceolata), and a lot of weeds. This is a very rich bed--last year's okra there grew 20 feet tall! While I still wanted the sage and the lime basil, which had reseeded itself there from last year, it was time to clean out the bed including scraping out the wood chips from between the bed and the garage. All this activity would provide an excess of nice rich soil, soil I raked off the pine needles again, pulled the few weeds that had sprouted around the corners of the new bed, and added about an inch of very dark rich soil. Also, lime basil sprouted along with the marigolds in the bed next to the new bed. Of course, I'll harvest it soon because it will be pesto time.

Important note: This soil enriching process is for edible garden beds only. For native or natural plantings, including trees, install the plants in the existing soil. No compost or fertilizer in the planting holes for trees and shrubs. For herbaceous plants, you could add some compost to the whole bed, but this would not be the ongoing enrichment that we use to grow our produce. If you'd like to provide a boost to a tree or shrub, you can lay a ring of compost around the plant as a top dressing outside of the planting hole to entice the roots to grow outward. If you do this more than once, lay each ring of compost out a little farther away from the planting hole. 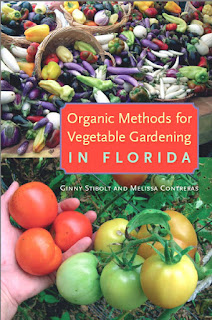 Also, here's a post about our moving that garden shed in the background, "Two geezers and a shed."

I hope you're getting ready for fall-into-winter gardening here in Florida, because this is our best season for edibles. While this post and the referenced posts contain a lot of details, our book, "Organic Methods for Vegetable Gardening in Florida," covers everything you need to know from seed to plate.

Posted by Ginny Stibolt at 3:15 PM

Adventures of a Transplanted Gardener

Adventures of a Transplanted Gardener click image for link

Please click on image to order "The Art of Maintaining a Florida Native Landscape." 2015.

Please click on image to order "Sustainable Gardening for Florida." 2009.

Adventures or a Transplanted Gardener page